Chapter Eight: Solar returns of Saturn returns for the USA

As usual, first we will take a look at historical cases to see what happened. Then, we will be looking ahead to see what the future will bring. The period before the U.S. civil war is perfect for this. A major national trauma on that scale has to be preceded by powerful celestial indicators. Once these are known, we should be able to spot future disasters well in advance and perhaps take action to minimize their effects on us.

What we are doing here is basically the same as doing solar return charts for people. The birth chart sets the stage and shows our potential. The return charts show how that potential develops. Sometimes it develops in spectacular fashion.

What happened in the years before the civil war was a cascade of major astrological events. The people of that time did not have a clue regarding the message of the planets. That made the war a virtual certainty.

Let’s start with the 1834 Saturn return of the USA, given in the previous chapter. Here is the solar return of that chart for April 1860 set for Washington, DC. 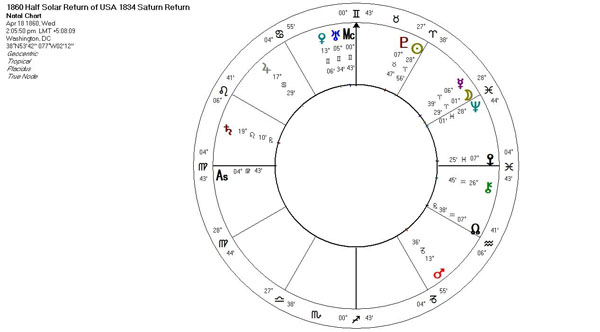 Always check the Midheaven and Ascendant first, as these are the strongest points in any chart.

Uranus (sudden upheavals) is contacting both major power points of the chart. It is conjunct the Midheaven and square the Ascendant. In addition, Uranus gains strength by being the most elevated planet. That’s enough of a problem right there. On top of that, Eris (discord) opposes the Ascendant and squares Uranus. Discord and sudden change are at the strong points of the horoscope and stressfully aspecting each other.

In addition, Mars opposes Jupiter. Mars is impulsive and the opposition from Jupiter can make you think nothing can go wrong.

Yes, Pluto trines the Ascendant. Remember that when there are strong stress aspects in a chart, a trine or sextile makes it easier for the stress aspects to act.

This solar return chart alone is enough to cause conflict. But it is not alone.

Next is the Solar Return of this Saturn Return Chart for October 21, 1860. There is Neptune right at the top, less than 2 degrees from the Midheaven. 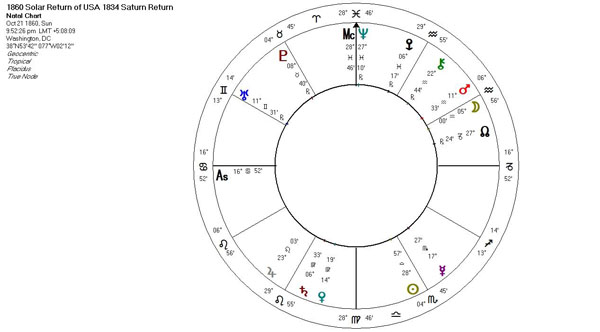 The election is less than a month away and the battle for the soul of the country is about to begin. And there is violent Mars in the 8th house of death, squaring the natural ruler of death, Pluto. The 8th house governs more than death and rebirth. It also indicates group values. Mars square Pluto indicates an impending battle over what those values will be.

This chart had a maximum effect for six months until the half-solar chart took over on April 18, 1861. That covers both the November election and the attack on Fort Sumter. 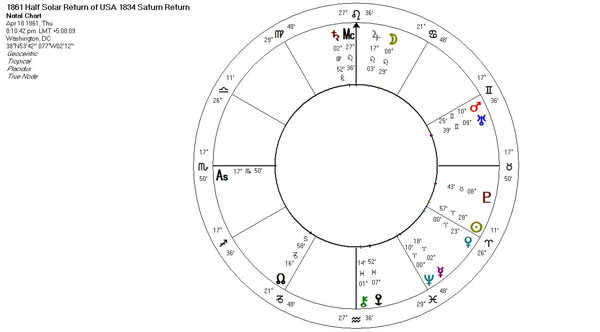 Saturn elevated in the 10th house. Difficult decisions have to be made regarding the future path of the nation. Violent Mars is less than one degree from Uranus. They are both squared by discordant Eris. All three gain strength by being in angular houses. Eris in the 4th house will channel the destruction from Mars and Uranus to the homeland. Pluto (death and rebirth) is the chart ruler and it squares the Moon. You don’t need astrology though, to tell you that a civil war will concentrate destruction to the homeland.

Fortunately though, Jupiter trines the Ascendant and the sun trines the Midheaven. That helps to hold things together.

There was a demi-solar return on May 11, 1860. This chart was in effect through the November election. It has four independent disruptive patterns of aspects, all pointing in the same direction. 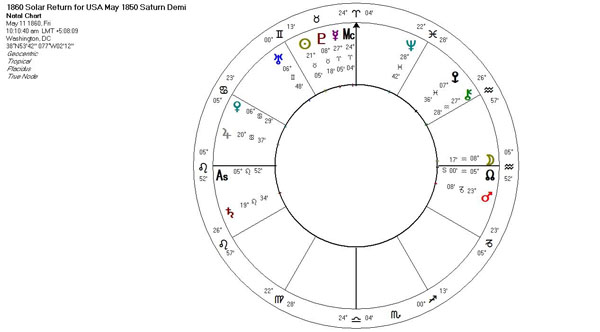 Six months later, on November 13, we get a half-solar return. 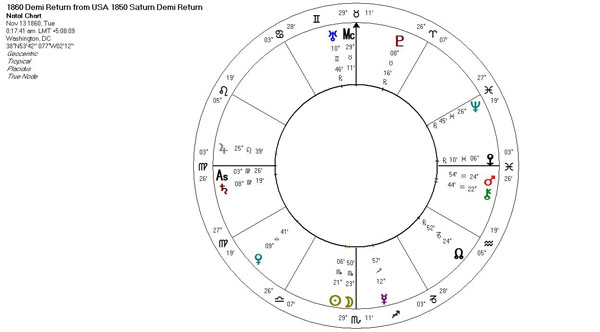 During this time, the Southern states broke away and started the confederacy and they fired on Fort Sumter starting the civil war.

The November 2, 1850, Saturn half-return had a half-solar return on April 30, 1960. It has a partile opposition between Mars on the Midheaven and Jupiter at the Nadir. Short tempers and a desire for action are affecting the foundations of the country. There is also a conjunction between the Sun and Pluto. 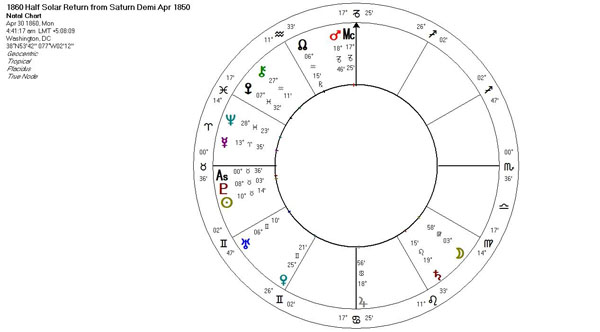 The November 2, 1860 solar return took place just before the election and stayed in effect through the attack on Fort Sumter. 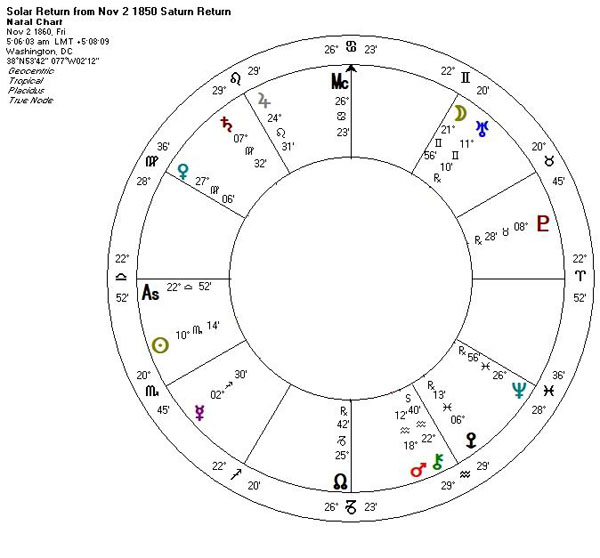 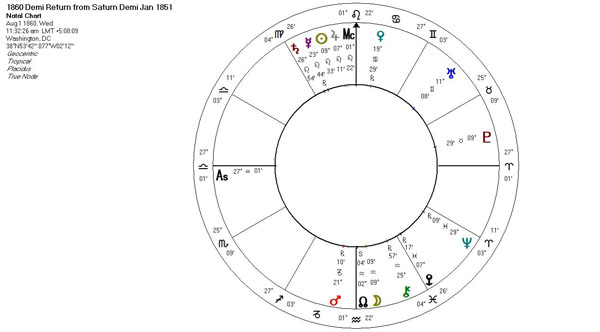 Do we have a trend here?

The last chart is a solar return for January 29, 1861. It was in effect during the beginning of the war. 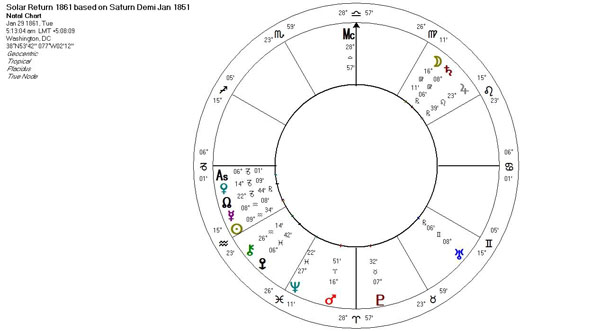 Several of the above charts might be considered powerful enough to cause a war all by themselves. When they act together in a short period of time, their combined force is overwhelming. What we have here is a cascade.

It’s ironic. The South wanted to be free and independent (Uranus) so that it could continue to restrict and enslave people (Saturn).

But what's going to happen in the future? What is the most recent Saturn Return doing to us now?