Can Saturn Return Charts have Birthdays?

That idea just occurred to me a few hours ago so I put it to the test. I looked at the chart of the German Empire because its birth time is known. The Saturn return charts are in the previous chapter.

Here are the solar return charts of the German Empire’s Saturn returns: 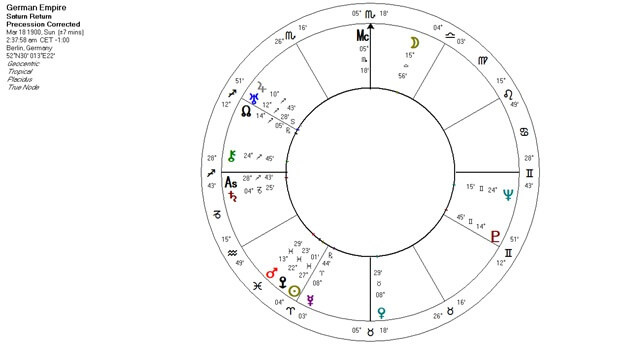 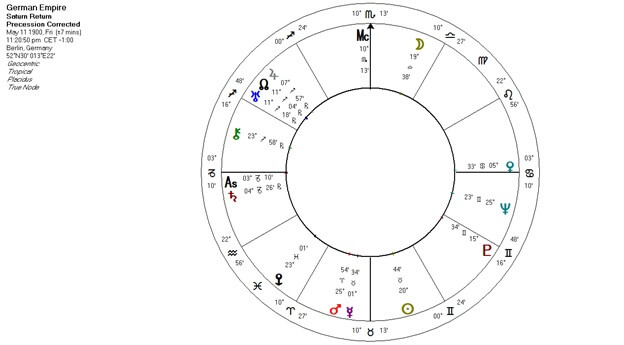 The December 3, 1900 Saturn return chart was given in the previous chapter.

Note that all three Saturn return charts have Pluto opposing a conjunction of Jupiter and Uranus. Once again, Uranus and Pluto are causing upheavals. And this time, Jupiter is there to make everything larger. 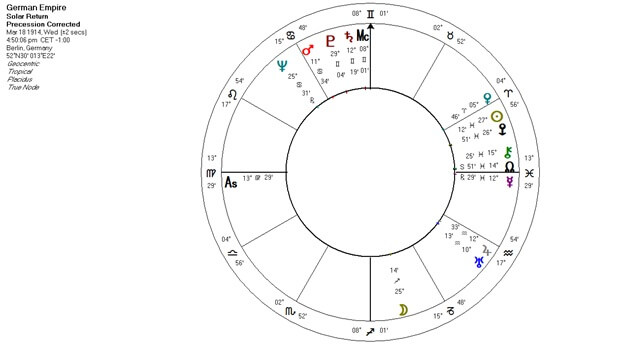 Saturn is conjunct the Midheaven and square the Ascendant. With Saturn you reap what you sow, and Germany had been planning a war with France for years.

The clincher though, is a close conjunction (less than one degree from exact) of the Sun with Eris (discord). They are both squared by Pluto (mass death). Pluto is in the last degree of Gemini and is about to cross into the first degree of Cancer. That’s the World Axis. World War I certainly affected the whole world.

Notice that Jupiter and Uranus are making a conjunction? That’s sudden and unexpected expansion. That same conjunction was in the original Saturn chart.

This chart is just one of three. How about the other two? 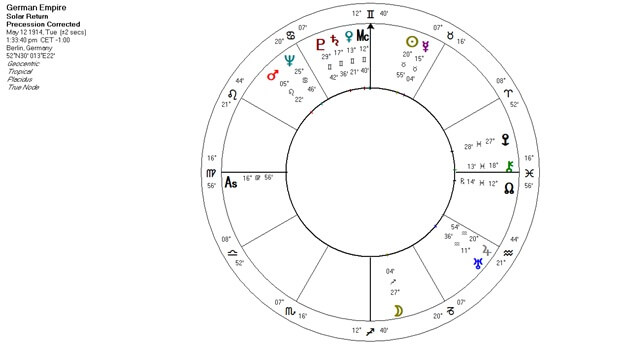 Once again, Saturn is conjunct the Midheaven and square the Ascendant. Saturn gives the results of past efforts, and for the previous several decades, Germany was preparing for war.

The moon is forming an opposition with Pluto. Eris squares both of them, making a T-Cross. In Greek and Roman mythology, Eris was the discord that always accompanied war (Mars). Well, here Eris is connected to Pluto: mass death. World War I was estimated to have killed 20 million people.

Let’s take a look at the last chart. 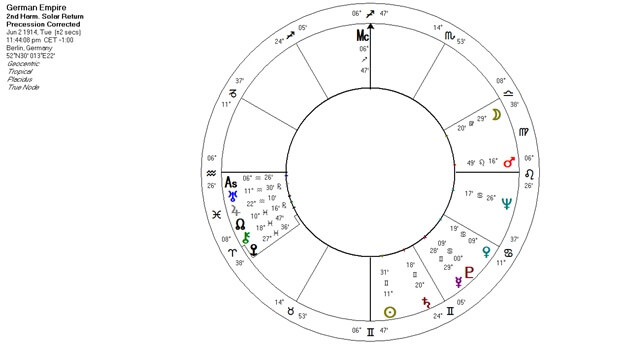 This is a half-solar return for the December 3 Saturn return chart. Uranus (sudden change) is the ruler of the Aquarius Ascendant and it is conjunct the Ascendant which increases Uranus’ power. Mars opposes Uranus (sudden war).

Once again, there is a T-Cross. The moon is opposite Eris and Mercury and Pluto square both of them— Pluto is now right on the World Axis.

Any one of these charts could have caused a war. The fact that there were three of them was a cascade that made World War I virtually unavoidable.

What do the birthday charts of the 2012 Saturn return say about the United States' future? That’s the next chapter.