A Look at Pluto's Subcycles: Pluto in Cancer

Pluto entering Aries starts a main cycle. Its entry into Cancer, Libra, and Capricorn can begin a subcycle. As always, the cycle starts with Pluto's entry into a Cardinal sign and ends when it is in a Mutable sign.

Pluto entered Cancer shortly after Julius Caesar was assassinated and the Roman Republic became an empire. The horoscope for Caesar's assassination is amazing: Pluto was making a direct station in the last degree of Gemini, which is on the World Axis. This alone shows major changes in the works. In addition, Pluto squares Uranus, another indicator of major change. Uranus opposes the Sun, a sudden threat to the leader. To top it oﬀ, Jupiter is on the Mars/Pluto midpoint, giving luck in carrying out a violent act.

Squares between Uranus and Pluto can last for a few years and they can turn the whole world upside down. Look at what's happened to the world between 2011 and 2015 during the last series of seven squares between those two planets. 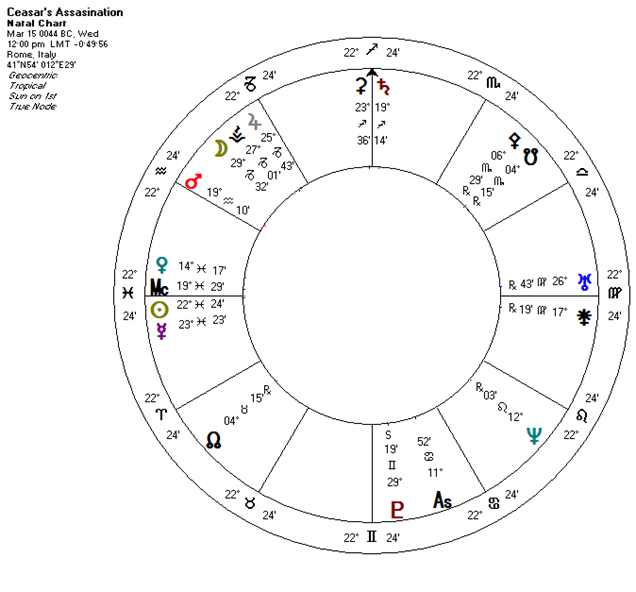 Pluto was in Cancer again from 202 to 220 when the Roman Empire almost collapsed into civil war. The next time Pluto entered Cancer was the year 444. During this cycle, the Western Roman Empire was starting its final collapse. The end came in 476 when the last emperor in the West was killed. Pluto was in Leo then. As always, the transit in a Fixed sign expanded the trend that started during the Cardinal sign transit. In this case, the trend was also completed during the Fixed sign. The Western Roman Empire was too weak to last until Pluto reached mutable Virgo.

As mentioned earlier, the Islamic Empire started its last expansion in the West by invading Spain in 711, while Pluto was in Cancer. The expansion continued while Pluto went through the Fixed sign Leo and stopped at the Battle of Tours in 732 with Pluto in the Mutable sign Virgo, ending the particularly short cycle.

The last time Pluto entered Cancer was May 26, 1914. World War I started two months later, killing millions. As a result of that war, three empires fell (Germany, Austria-Hungary, and Russia). Pluto stayed in Cancer until 1939. Before it left we had a major pandemic, the Spanish flu, killing more people than World War I. That transit also gave us the 1929 stock market crash, the Great Depression, and the rise in power of both Hitler and Mussolini.

Cardinal signs start cycles--they don't finish them. What Pluto in Cancer started, Pluto in Leo finished. The Leo transit gave us World War II, where both Hitler and Mussolini fell from power, and the Cold War between the USA and the Soviet Union began.

How come we don't get a World War every time Pluto enters Cancer? For something that big, we need more than one planet. Shortly after Pluto entered Cancer in 1914, it was joined by Saturn. When World War II started, Saturn was squaring Pluto as Pluto changed signs. We have only these two cases to go by (thankfully), but it seems to be the combination that's associated with World Wars. Saturn must aﬄict Pluto either while Pluto is changing signs or shortly afterward.

Capricorn is the sign of organization. Pluto is death and rebirth, and its transit through this sign can reorganize the world.

One of these cycles started in 1517, when Martin Luther nailed his 95 Theses to the door of his church, starting the Reformation. Many others were involved in the Reformation, but they all began around the same time: with Pluto in Capricorn. The Reformation set oﬀ 150 years of religious war, which completely reorganized Europe.

The chart for the day that Luther nailed his Theses to the door has a Sun-Mars conjunction opposite Uranus. Those oppositions are nice aspects for starting a fight. Pluto is in early Capricorn and making an out-of-sign conjunction with Saturn. The Sun-Mars opposite Uranus gets the ball rolling and the Saturn-Pluto conjunction makes it a big deal. Uranus is also opposite the Sun/Mars midpoint, which added to the disruption and chaos.

Notice that Saturn is not too far from Pluto and was completing the conjunction a few weeks later. This is similar to the Saturn-Pluto conjunction that took place shortly after the start of World War I. 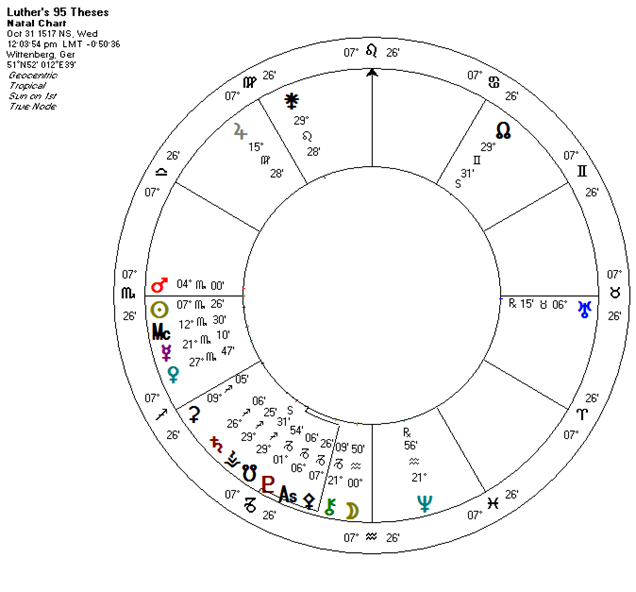 The next Pluto-in-Capricorn cycle gave us the American Revolution. The Declaration of Independence was signed on July 4, 1776. That subcycle started a worldwide change from monarchy to democracy, a change that took over 150 years to spread around the globe. We can see the same pattern once again when Pluto entered a Fixed sign (Aquarius), and we got the French Revolution. Pluto then entered a Mutable sign (Pisces), and the ideas of the French Revolution were spread all over Europe by Napoleon's troops. Napoleon was defeated, of course, but not the ideas. They returned with a vengeance in 1848 when Pluto was once again in Aries and joined by Eris (discord) and Uranus (sudden change). At that time, there were revolutions and uprisings all over the world.

Pluto is in Capricorn again. It entered that sign during the last week of January 2008. Less than two months later, the Bear Sterns Company went bankrupt, starting a downward trend that turned into a major financial collapse. Pluto is telling us that the present way the world is organized is going to be changed. God only knows into what.

Shouldn't it be obvious that massive debt cannot be piled up forever and that eventually it has to be paid back or defaulted? Let's take a look at the Pluto ingress chart for January 2008. 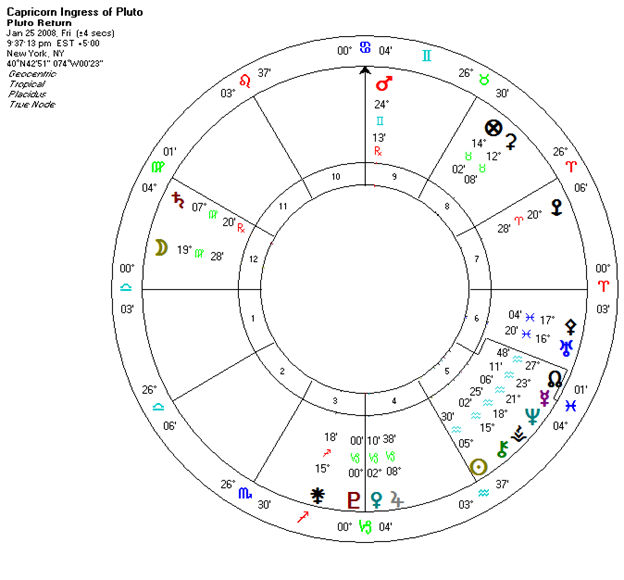 Why set the chart for New York? New York is the financial capital of the country, if not the world, and this subcycle began with a world-wide financial crisis.

What a chart! Of course, Pluto is on the World Axis since this is the chart for an ingress into a Cardinal sign. But all the chart angles are also on the World Axis. Pluto, the planet of total transformation, squares the Ascendant and Midheaven, maximizing its influence. Notice Pluto sits only 4 minutes of arc from the Nadir, which rules the foundations. The bottom of the horoscope is also the home and real estate. Venus rules the Ascendant, the 2nd house (money) and the 9th house (laws) and is making a close conjunction to Pluto (transformation). We had a major international financial crisis that turned the financial world upside down. Since the Financial Crisis of 2008 started with a Cardinal ingress of Pluto, we are only at the beginning of a major long-term change. Count on it.

The American Revolution (Pluto in Capricorn) which was a local aﬀair triggered oﬀ the French Revolution. This was a lot bigger, bloodier, and had a wider impact. What we have seen since Pluto entered Capricorn in 2008 is just the prelude.

Pluto will enter Aquarius on March 23, 2023. It will only stay there until June 11 before it retrogrades back into Capricorn. At most, Pluto will just give us a brief glimpse of its intentions. Pluto re-enters Aquarius on January 20, 2024, but it still won't stay for long. It returns to Capricorn on September 1. Pluto finally enters Aquarius for the full transit on November 19, 2024, and will stay there until March 8, 2043. Pluto will have 19 years to continue the enormous changes it started while it was in Capricorn.

It is a cliché to say that we live in a time of change. Things are always changing. But if Pluto behaves as it has in the past, the changes we see around us now are only the beginning of a truly massive worldwide shift. Pluto changes cannot be avoided, however, we may be able to modify them a bit. In our personal lives when Pluto hits, the best advice is: "If you find yourself falling, then dive!" In other words, "go with the change". After Pluto takes everything you thought you needed, the rebirth happens and the Phoenix rises out of its ashes.

In another two or three hundred years, people will read about our present era in their history books (or whatever they will be using instead of books), and they will say "What a wonderful time to have been alive! Look at all those big changes!"