Disclaimer: This is a study of the Astrological factors involved in the historical American presidential assassinations. It is most certainly NOT meant as any sort of guide or advocacy.

We will use the same procedure as before:

In the decade before the U.S. Civil War, there were three conjunctions between Uranus and Pluto: June 26, 1850, September 25, 1850, and March 25, 1851. The sudden, unexpected upheavals of Uranus had their power increased by the volcanic intensity of Pluto. The half-solar return of the June 26, 1850 chart had few indicators. The closest half-solar return of the September 25, 1850 conjunction happened on March 22, 1865. 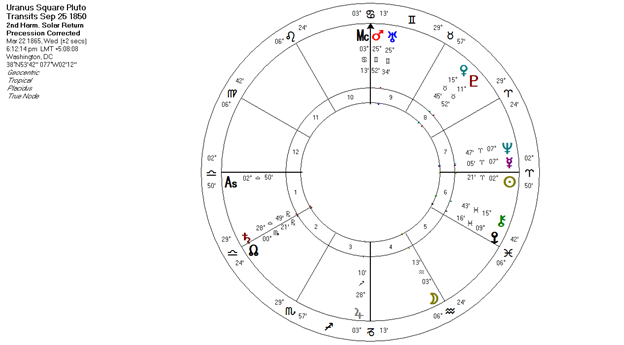 Just one day later, we get the solar return of the March 23, 1851 chart. It still has Jupiter opposite the explosive Mars-Uranus conjunction. 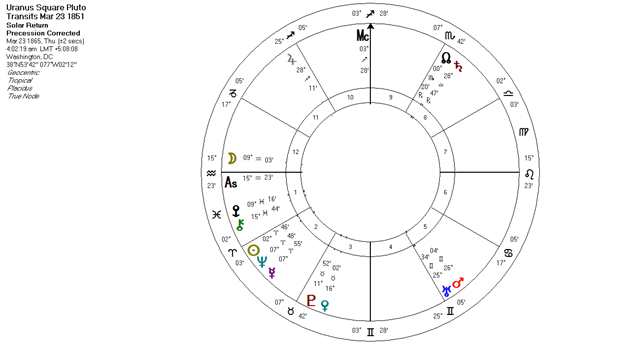 This time the "Sudden Violence" conjunction of Mars and Uranus lands in the 5th house: The Death of the President. They both oppose Jupiter. Guess what house Jupiter rules? It rules the 10th house, the President. The President is being opposed by sudden (Uranus) violence (Mars) in the house of his death. Either of these charts could have caused Lincoln's assassination by themselves. Since they were acting together, their effect was increased. But these charts were not acting alone. The Cascade is just starting.

The stressful aspects of Saturn and Pluto can also be deadly. Pluto may rule death, but Saturn is the grim reaper who takes you to Death's Door and pushes you through. There were three 90 degree square aspects between Saturn and Pluto occurring before Lincoln's assassination: Sept.7, 1858, March 10, 1859, and May 29, 1859. The March 10, 1859 chart failed to give positive results.

Here is what the other two charts showed: 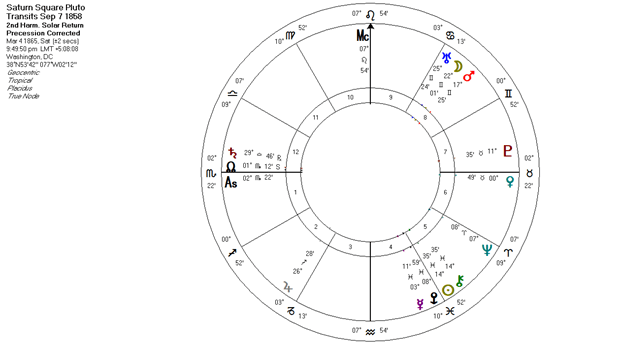 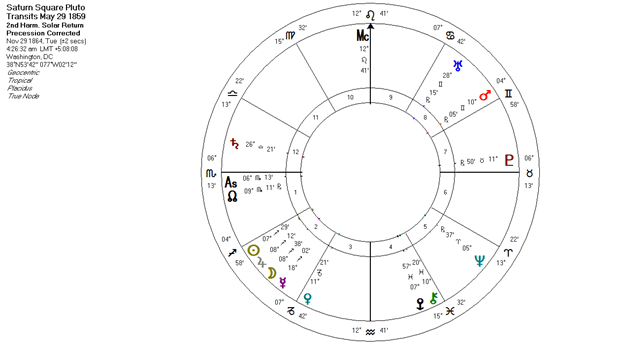 Once again, Leo is on the midheaven, so the sun rules President Lincoln. The moon rules the 9th house of the President's hidden enemies.

We now have four return charts out of six that indicate a presidential assassination in the same time period. The cascade continues to build.

What happens when Neptune, the planet of dreams, ideals, and imagination, joins with Saturn, ruler of material reality, Lord Karma, the stern judge who gives us the results of our past actions for better or worse and lets the chips fall where they may? In this case, the three oppositions between Saturn and Neptune occurred in 1862 and 1863 at the height of the civil war. The dates were November 5, 1862, March 11, 1863, and September 5, 1863. The Civil War was fought over slavery. Slavery is ruled by the dark side of Neptune. Saturn ends cycles, and its opposition to Neptune was a message that slavery's time was up—no matter the cost. The first one had a Solar return on November 4, 1864 (1864 was a Leap Year, so the chart got set back one day). 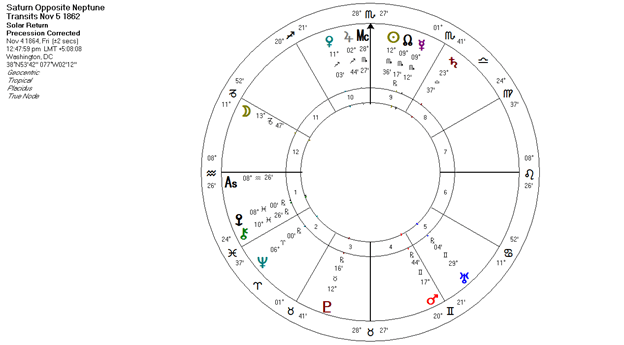 The second chart had a solar return less than five weeks before the assassination. 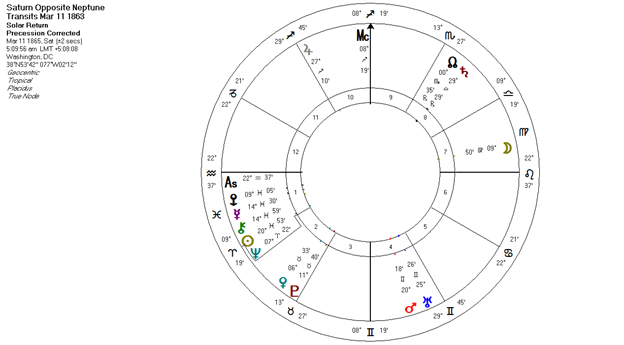 This chart alone looks like it might have been strong enough to cause the assassination. The third opposition of Saturn and Neptune had a Solar return on March 2, 1865. 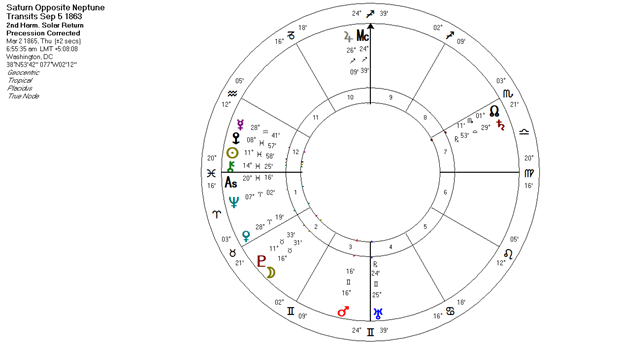 All three of these charts have positive results. We now have a total of seven charts out of nine cases that indicated Lincoln's assassination. And we aren't finished yet. The Cascade continues to build.

Saturn rules everything old, traditional, and orderly. It insists on doing everything "by the book." Uranus wants to tear up the old book and write a new one. The first chart in this cycle had a Solar return Chart on December 13, 1864. It failed to give sufficient positive results. The second Saturn/Uranus square had a Solar return on January 29, 1865. 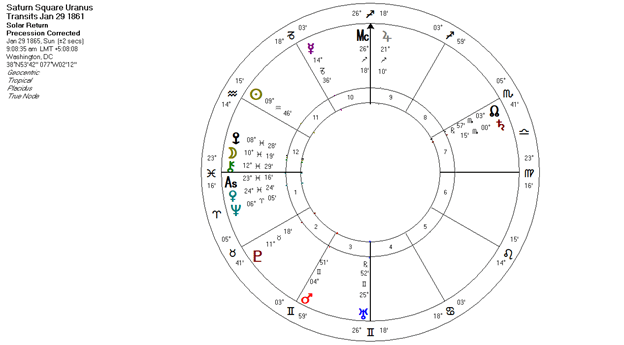 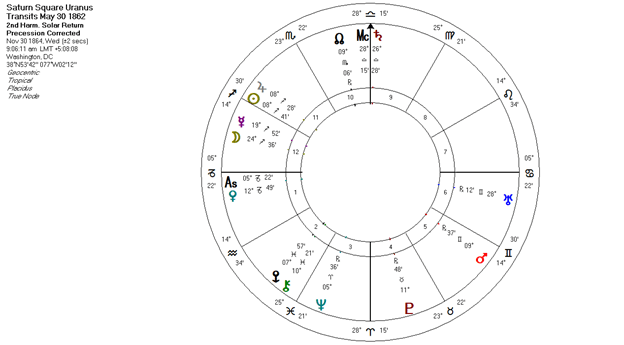 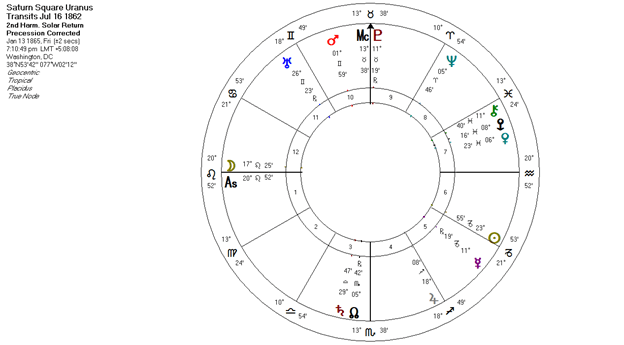 Two out of these four charts gave positive indications. A total of nine charts indicated the death of President Lincoln in the same time period.