There were seven squares between Uranus and Pluto from 2011 to 2015. Let's follow the same procedure we used to look at the future of China. First, set the location of the Uranus-Pluto squares for the nation's capital, Washington, DC. Then, run solar and half-solar returns for these charts through 2030. Next, we look for hard aspects to the chart angles. Does any planet predominate? Yes. This time though, it is not Pluto that keeps popping up at the strong points. The most prominent planet by far is Neptune.

How can that be? Sure, the USA has a drug problem, but that has been going on for over 60 years. Yes, Neptune in hard aspect to the Midheaven can make the country's leaders corrupt, pathological liars—or just plain deluded and confused. But we have always had that, and so have plenty of other nations. What else can Neptune signify?

Remember what kind of charts we are looking at. These are solar and half-solar returns for the seven Uranus-Pluto squares that occurred from 2012 to 2015. These charts are based on Uranus and Pluto, meaning they are charts of sudden upheavals, major battles, and cataclysmic changes. Neptune is the prominent planet in these charts, indicating that the major battles and changes will happen in Neptune's area of rulership: dreams and ideals.

A Prominent Neptune can also mean there is a battle for the country's soul. We can see this battle raging all around us now. Pluto going through Capricorn is opposite the Cancer sun-sign of the United States. Pluto divides people up into battling sectarian groups—we certainly have had that for the last few years. Uranus suddenly turns everything upside down—we have had that too. But the bottom line is all of the upheavals going on for the past decade in the USA are about choosing the path this nation will take and which ideals it will follow.

I read somewhere that Uranus is just an eccentric crank with weird ideas without Neptune, and Pluto is the neighborhood thug hanging out on a street corner. Neptune is the planet that gives a massive following because it rules ideals and dreams.

And dreams are what inspire action.

The power of Neptune, added to that of Uranus, and Pluto, can create mass movements that can take over a country—or even the entire world. Neptune is now transiting through Pisces, the sign that it rules, and that makes it even more powerful. But what is the meaning of this, and how does it determine what is going to happen?

To predict the future, we have to take a look at the past. Was there ever a time like this when Neptune was going through Pisces and Uranus, and Pluto made a series of stressful aspects as well?

The last time Neptune was in Pisces was 1847 through 1861. That was the set-up period for the civil war. The big issue back then was slavery. Neptune rules all forms of human restriction: hospitals, prisons, orphanages, and yes, the entire institution of slavery.

Sure enough, there were three conjunctions of Uranus and Pluto in the decade before the civil war. These occurred June 26 and September 25 in 1850, and March 23, 1851. If you run solar and half-solar returns for every year from 1851 up until the start of the civil war, how many times was Neptune at a strong point, making a conjunction, opposition, or square to the Ascendant or Midheaven?

For the June 1850 and March 1851 charts, there was only one case of Neptune making a stressful aspect to a chart angle. Most of the stressful aspects to the chart angles came from Pluto, Saturn, and Uranus. This is consistent with a nation under stress and in danger of breaking up. The September 25, 1850 Uranus-Pluto conjunction however told a different story. There were 17 solar and half-solar return charts, 12 of which had Neptune afflicting either the Ascendant or Midheaven—that's a 70.05% success rate.

It's important to remember that the source of the power comes from the original conjunction of Uranus and Pluto. Neptune, because of its angular placement, is holding the reins and focusing that energy into a battle for ideals.

Let's take a look at those 12 charts from the 1850s and 1860s. We'll then get a better idea of what the recent Uranus-Pluto squares will do to the United States during the next decade. These are the solar and half-solar returns from the original chart of the Uranus-Pluto conjunction that took place September 25, 1850:

In the first chart, September 25, 1851, Neptune squares the Midheaven and is joined by Eris (discord). Would that indicate discord over the nation's dreams and ideals? 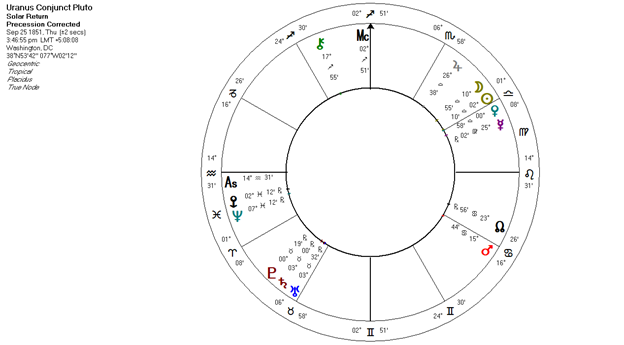 In the March 22, 1853 chart, both Chart Angles are being hit. Neptune and Eris are opposing the Ascendant and squaring the Midheaven. 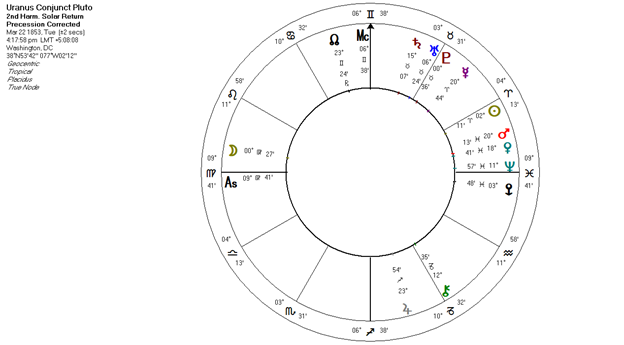 In the September 25, 1853 solar return, both Neptune and Eris are just in back of the descendant. Trouble was brewing behind the scenes. 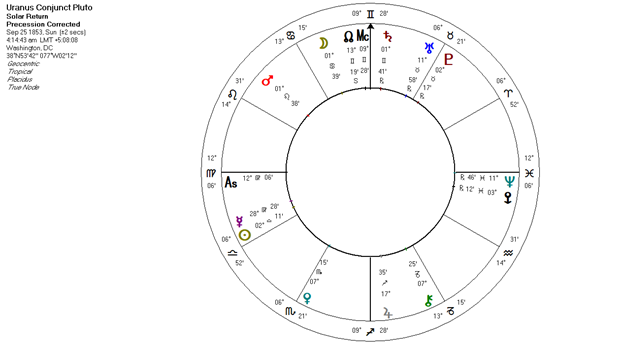 In 1855, trouble was starting in Kansas. Neptune and Saturn both afflict the Midheaven. Saturn at the Nadir brings old problems to the surface. 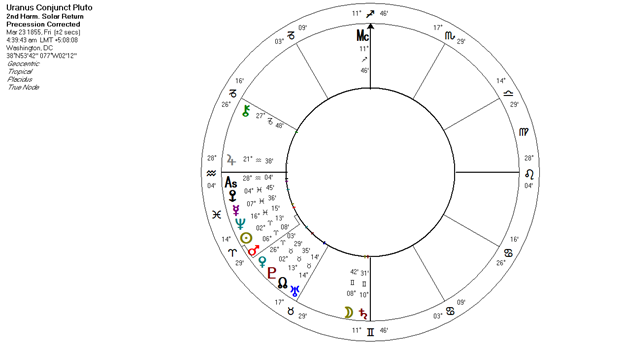 In the September 1855 solar return, Neptune is still squaring the Midheaven. 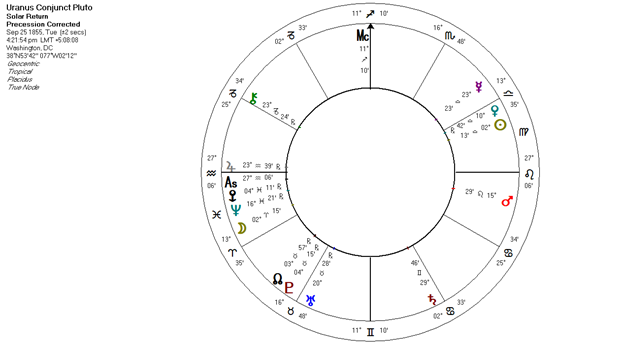 The battle continues. In the next chart, Neptune opposes the Ascendant and squares the Midheaven—a double hit. 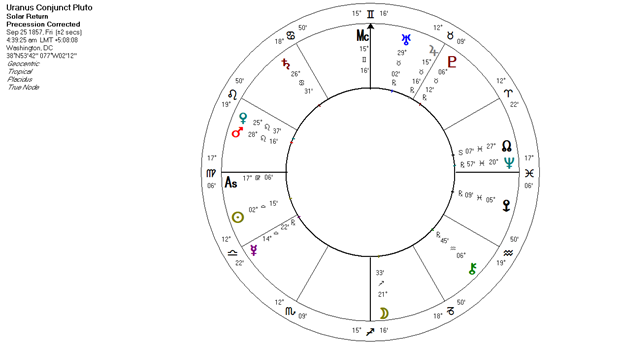 In the March 22, 1857 chart, Neptune again opposes the Ascendant. 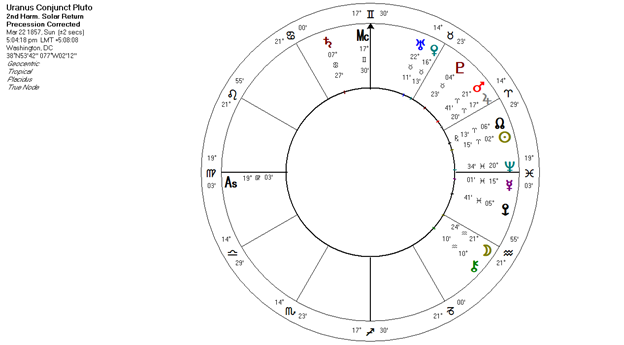 In the March 1858 half-solar return, Neptune opposes the Midheaven as Eris (discord) squares both the Ascendant and Mars. Mars is conjunct the Ascendant and is in the 12th house position to the Ascendant. This indicates that anger is building up behind the scenes. 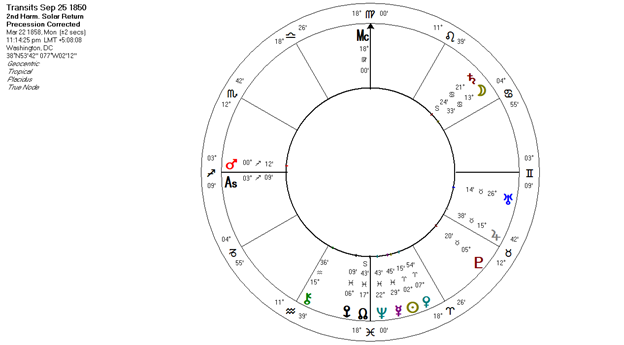 In the March 23, 1859 chart, Neptune squares the Midheaven. There is also a Yod (also called the "Finger of God"). If you have a Yod in your personal chart, you can feel as if you are being swept along by forces beyond your control. The normal Yod happens when there is a sextile between two planets and a third planet (or chart angle) is opposite their midpoint. Here we have Saturn squaring a Mars-Pluto conjunction and the Midheaven opposite their midpoint. Even individually these three planets can cause trouble. Here they are all together and working as a unit in a stressful chart pattern.. Because of the square's stressful nature, this Yod is sometimes referred to as God's Other Finger. This chart affects the period just before the election of 1860. 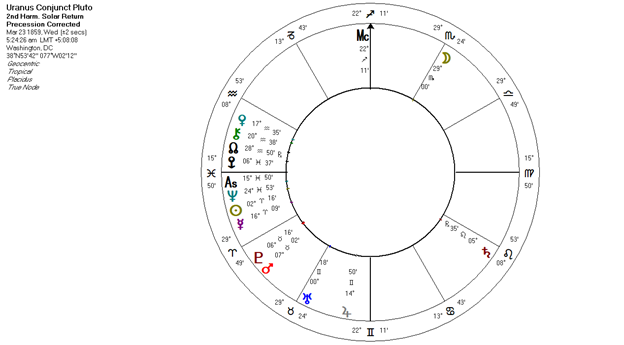 Neptune squares the Midheaven in the next chart but is joined by Uranus squaring and Mars opposing the Ascendant. The civil war is approaching. 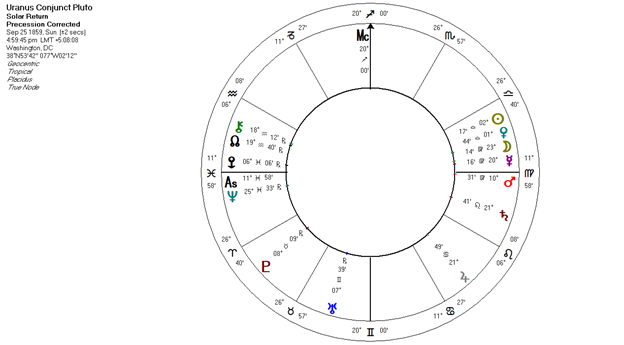 In the March 22, 1860 chart, Neptune is conjunct the Midheaven and Mars squares Neptune. 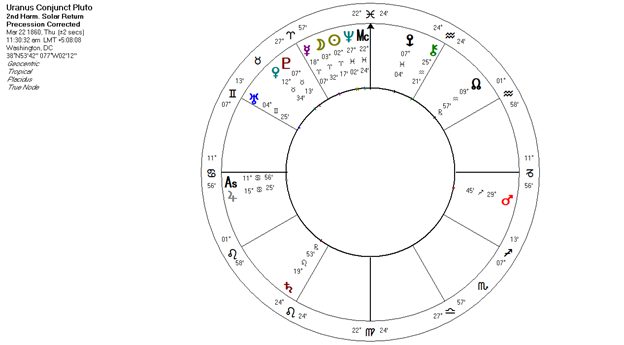 The added effect of Mars is making the nation ready for battle. Neptune squares the Midheaven and opposes the Ascendant. There is also an opposition between Saturn and Eris. Uranus squares both of them. The civil war is only a few days away. 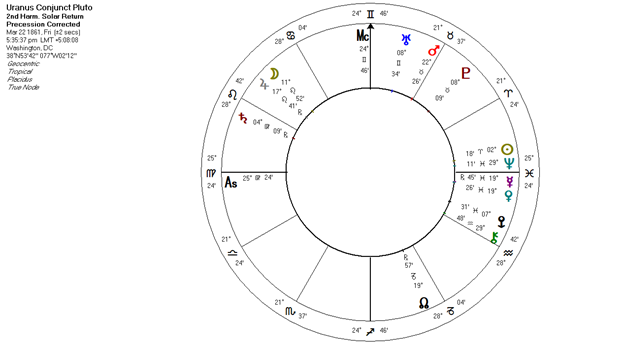 And there you have it: 12 charts that helped drive America steadily toward the civil war. So what's coming up next for America? The future is complicated. Neptune is choosing the battlefield, the battle for the soul of the nation. But it seems as if all the outer planets want to get into the act. And they all seem to be aiming in the same direction. It's a Cascade. The Cascade of stress aspects has already started. We are in the middle of it now, and it has another decade to run. A lot of the action will be with return charts—let's start with Saturn.